In late December, my good buddy Thayne Rich hit me up to help build and shoot/session one of Utah's infamous gap jumps, Upper Flagstaff Gap. We started our build on New Year's Day. It was a good way to start of 2017 by starting anew, and building upon the past, living in the present, and preparing for the future (heady thoughts, man). It was also a good way to shake off 2016's hangover. The jump would eventually take us 4 days to build (5 days to build if you count the day before the second session, when we had to clear off a foot of new snow that fell on the jump), thousands of pounds of snow moved, two sessions, some mind-blowing tricks, plenty of exhaustion, some crashes, some stomps, some frustration, and countless good times and stoke. But first, a short bit about the jump.

While Chad's and Pyramid Gap have recieved much of the spotlight as far as Utah's gap jumps go, Upper Flagstaff is by no means a small undertaking, to build or to hit. The gap jumps roughly 90 feet from the east side of Flagstaff Gully to the west side. The jump saw quite a bit of attention in the early 2000s during the days of Wind-Up Films and filmmaker Kris Ostness. According to Thayne, prior to us, the jump hadn't been built in at least ten years. I'm inclined to believe him, as the jump is easily seen from Alta, and I don't ever remember seeing the jump built. If anyone out there reads this and can shine some light upon the subject, please do. I first remember seeing footage of the gap in Ostness's classic ski flick "Teddybear Crisis", and have wanted to build it ever since. Thayne had wanted to build the upper gap ever since he hit Lower Flagstaff gap at the ripe age of 13. This jump build and session had been a long time coming for us. There's some good footage of the gap in "The Bolero Project", I highly suggest giving it a watch!

Thank you to everyone that helped build and session: Tim Durtschi, Tim McChesney, Ian Hamilton, Blake LaCroix, Tim McChesney, Brita Sigourney, and Bill Kelly. And thank you to Thayne, for being the mastermind and head architect behind this beast. Thanks as well to Freedle Coty, Hennie Van Jaarsveld, and Austin Ramaley, for filming, and Brent Benson for shooting stills as well.

Here are some photos from the experience. I shot a few that I'm pretty stoked on, which I'll be sharing next fall (hopefully in print somewhere, but time will tell and I don't want to get my hopes too high). For now, here are some behind the scenes and b-roll shots. 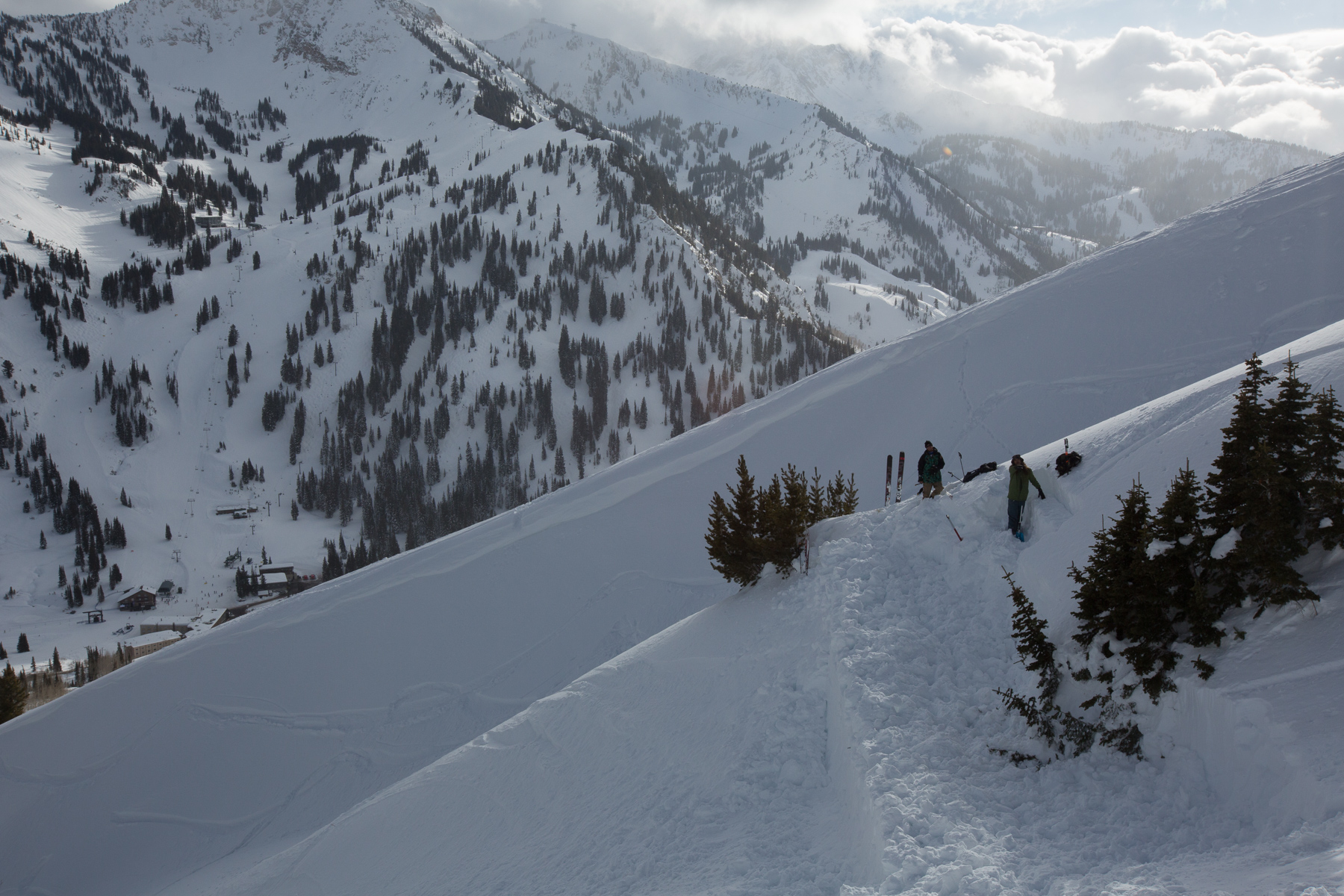 Day one of building with Thayne and Blake. The crucial part of the in-run (150 feet or so) is built on a side hill with a mega-compression in the flat bottom before the jump. This part took the most work to build, as we wanted the compression to be as smooth as possible, and as minimal as possible, as one needs to be going about a zillion miles per hour to clear the gap. 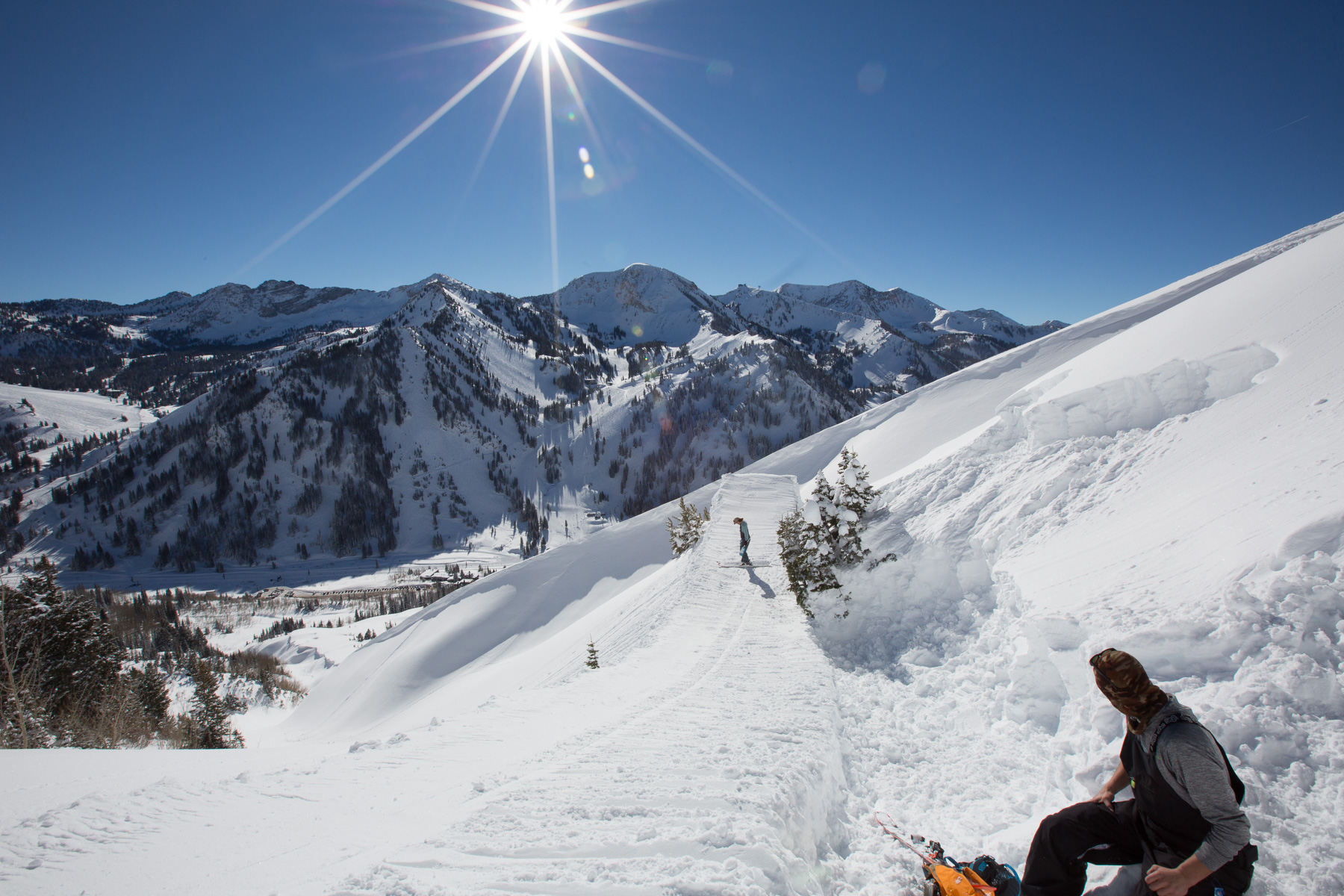 Thayne fine-tuning the jump as Durtschi takes 5 and watches. This was taken on the day of the first session, where about 3 hours of work was required before a 5 hour long session. Everyone was exhausted at the end of the day. It's a little tough to tell, but the inrun that we built up was about six feet wide, a few hundred feet long, and about 12 feet deep just in front of where Thayne is standing in this photo. We moved a lot of snow, to say the least. I remember reading a quote, I think from Kris Ostness, "Perfect inruns make for perfect landings" or something like that. Very true words. 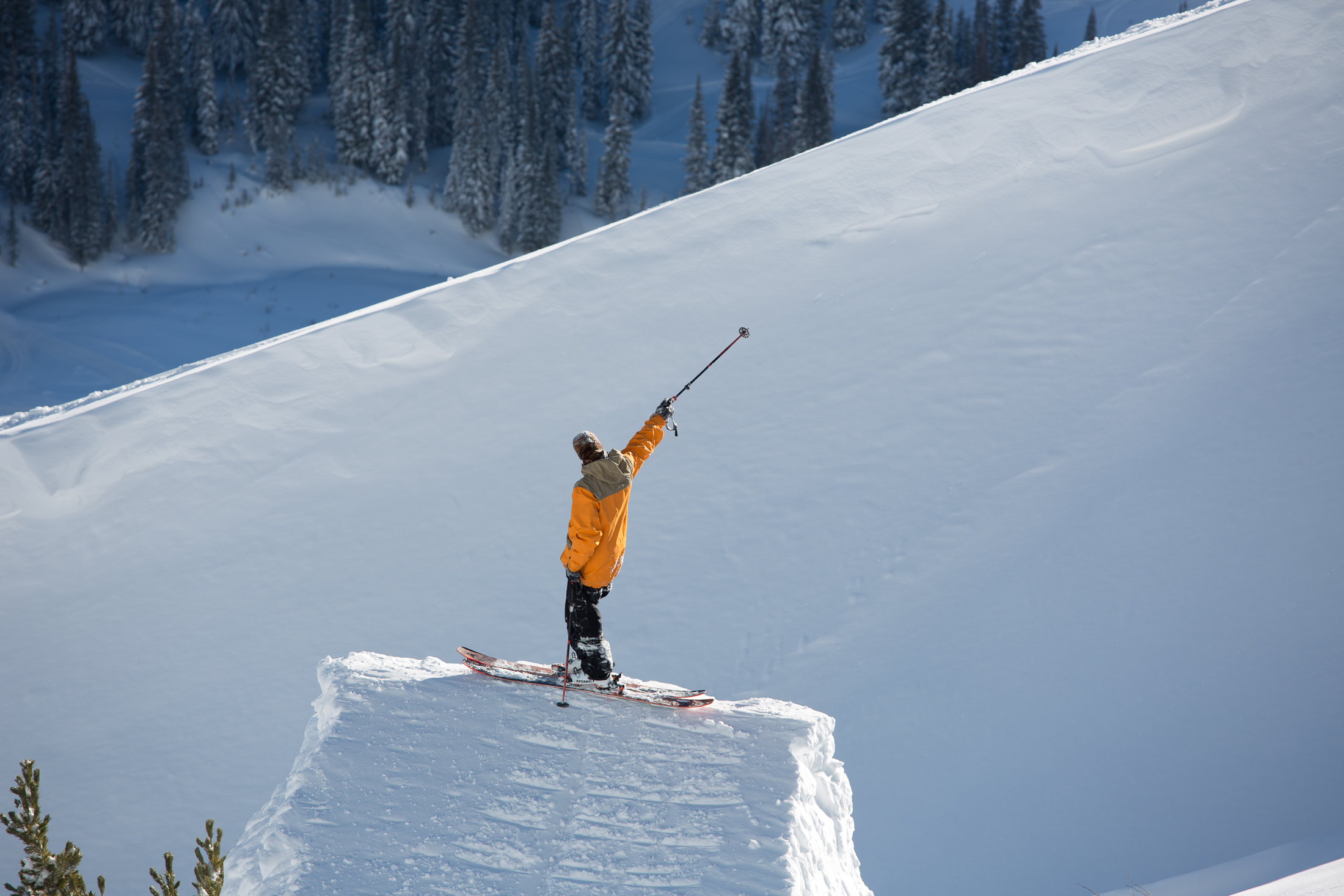 Yup I'll just take of right here and land waaaay over there.... Mind the gap.

Tim McChesney's first hit on the jump. While I like this shot, this angle doesn't entirely do justice to how big the gap is. Cork 720 Japan Grab. Yes, he stomped it. 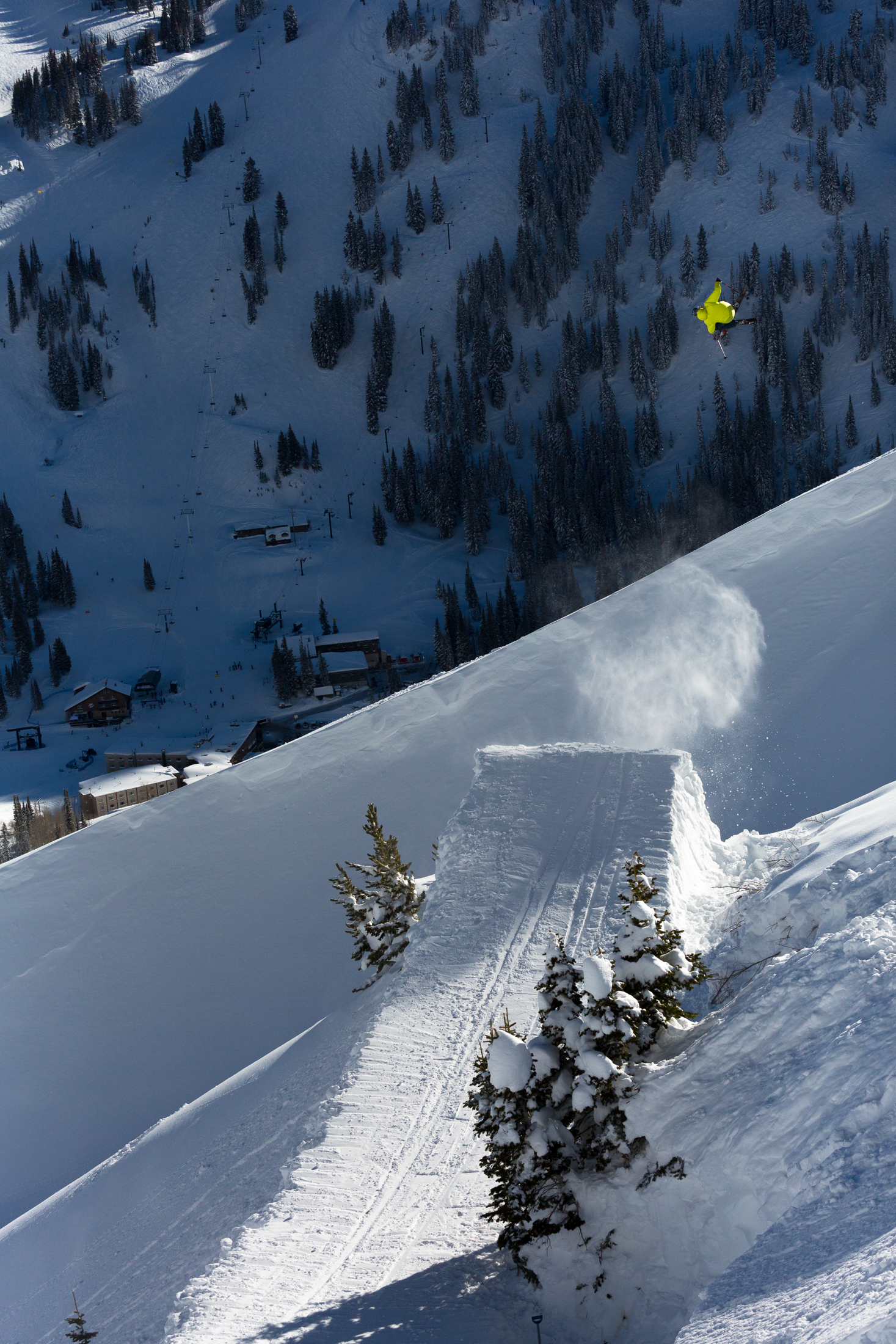 This angle does do justice to how big of a jump it is. Thayne Rich, doing what he does best. 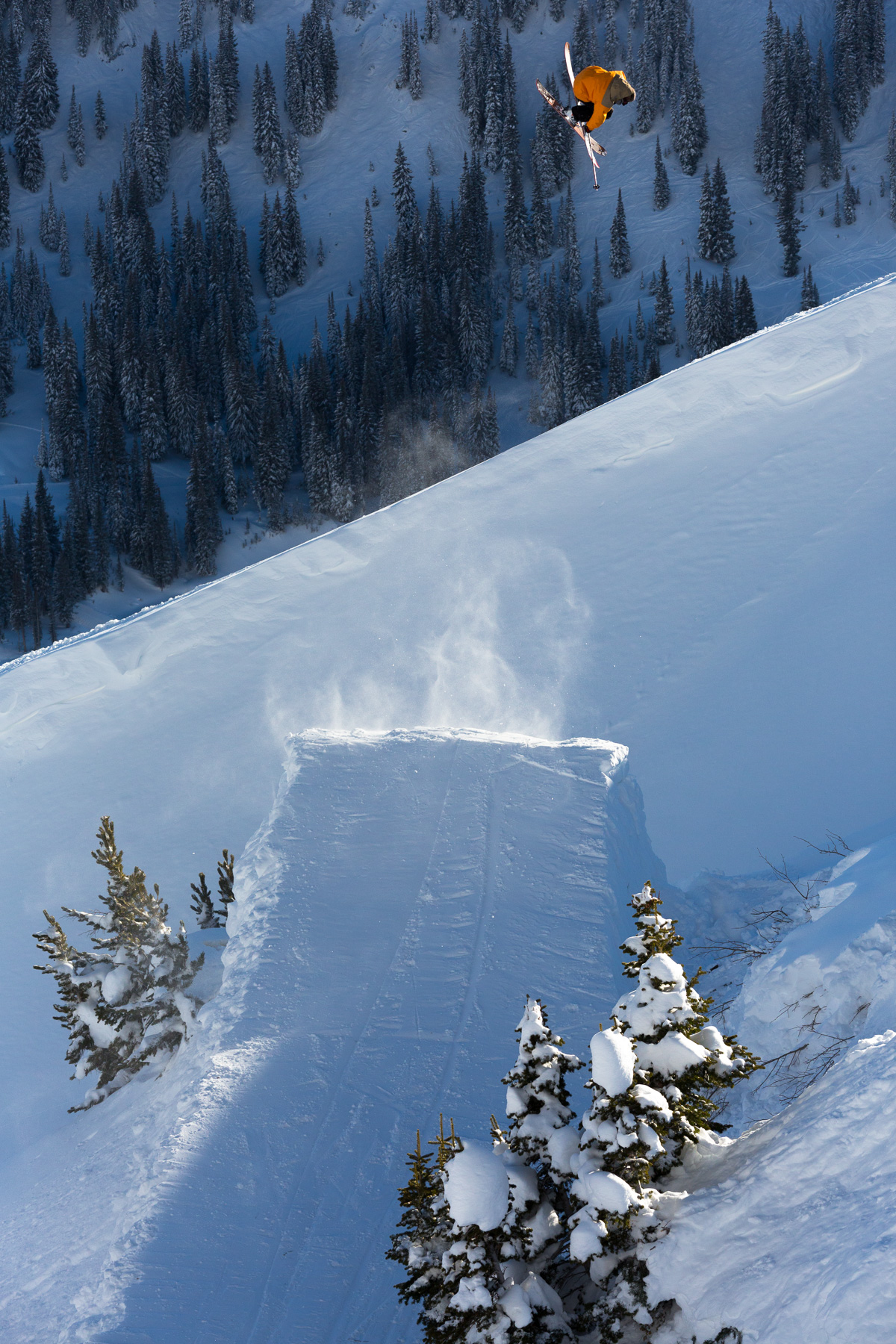 Tim Durtschi, cork 5. I think this was Tim's 3rd attempt trying this trick at the end of the day. He took probably 4 hits before that, and finished building the jump for 3 hours prior to that. Needless to say, all of that hiking and shoveling will tire a guy out. He stomped this hit, and rode out switch out of view. We saw him pop into view way down below us, still skiing switch, before disappearing again behind a roller. We all thought that he had called it for the day and taken off, abandoning his gear by the jump, but half an hour later he showed up after boot packing his way up again. 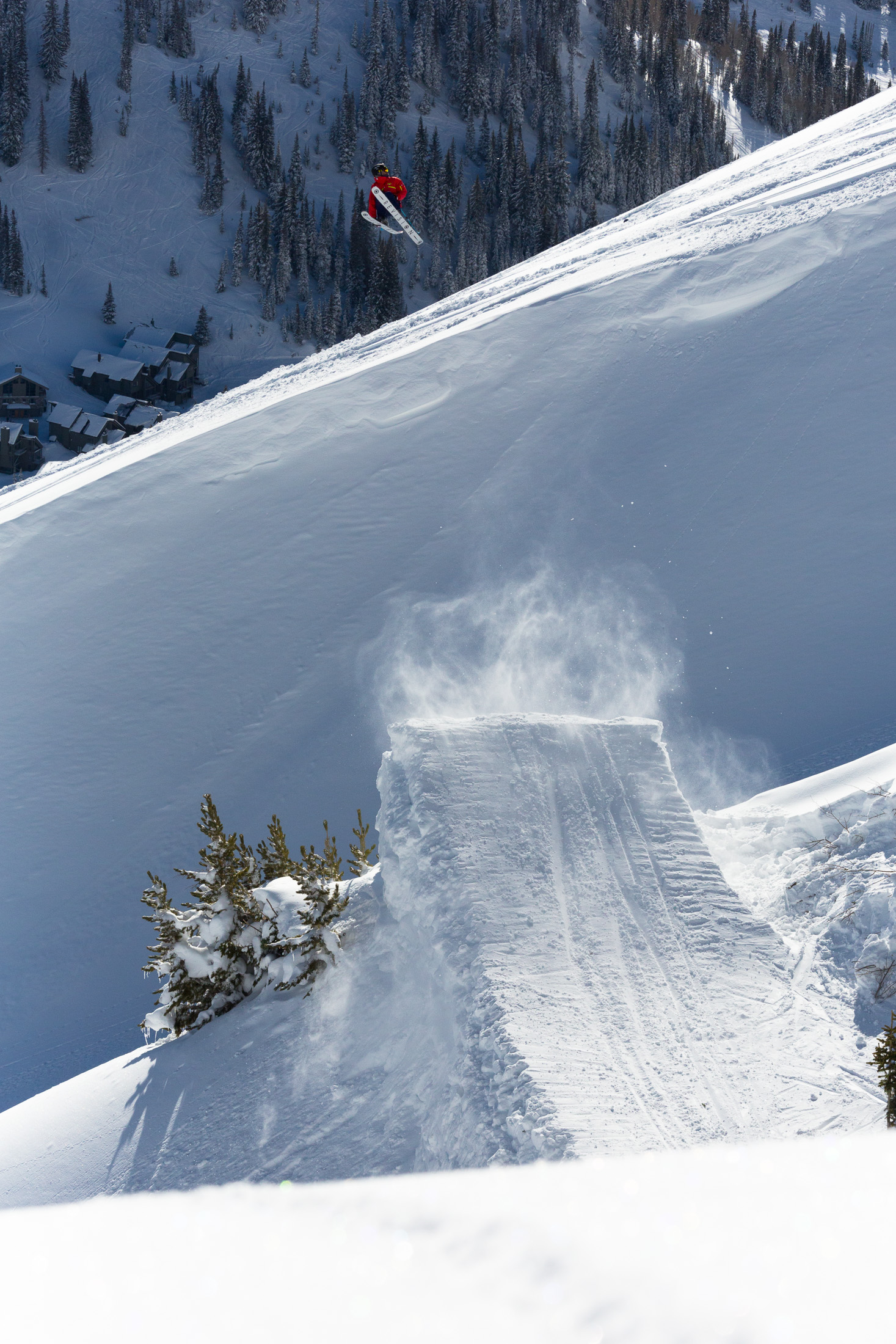 Ian Hamilton. Can anyone guess what trick he is doing here? Hint: It's not one you will see many people throwing. 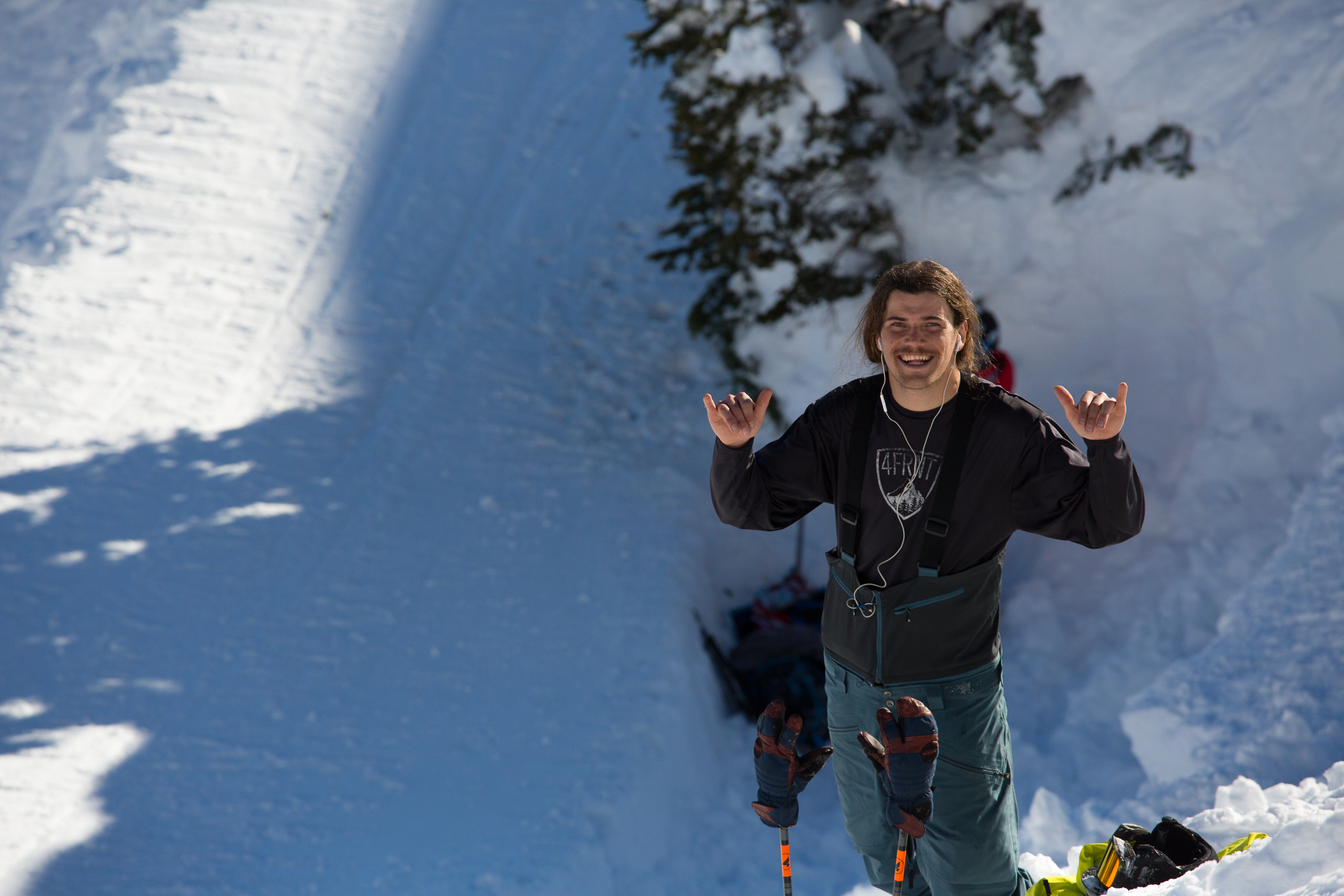 Thayner, stoked to not be shoveling snow any more. "Mahog up" -Willie Nelson. 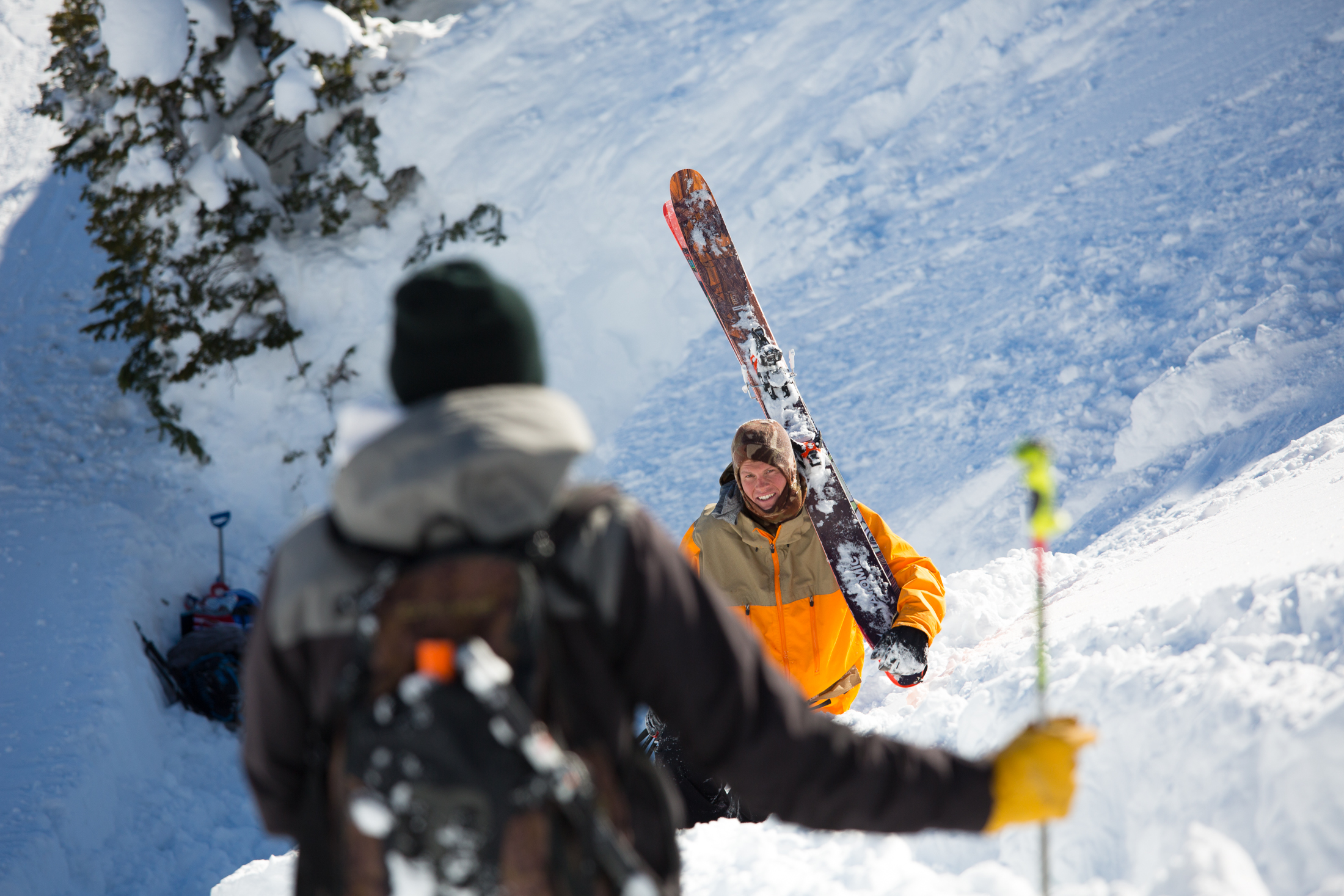 Durtschi invited legendary Wasatch photog Brent Benson up to shoot the session as well. Brent has been around for pretty much every historic jump session in the Wasatch, a true OG. It was fun to hang and talk with Brent, as he and I were shooting stills from a similar angle. Benson had built and shot Upper Flagstaff several times, but this session was the most "pristine" he said he had ever seen the jump. Building during storm days pays off! Here Benson offers some stoke to Durtschi as he hikes for another hit. 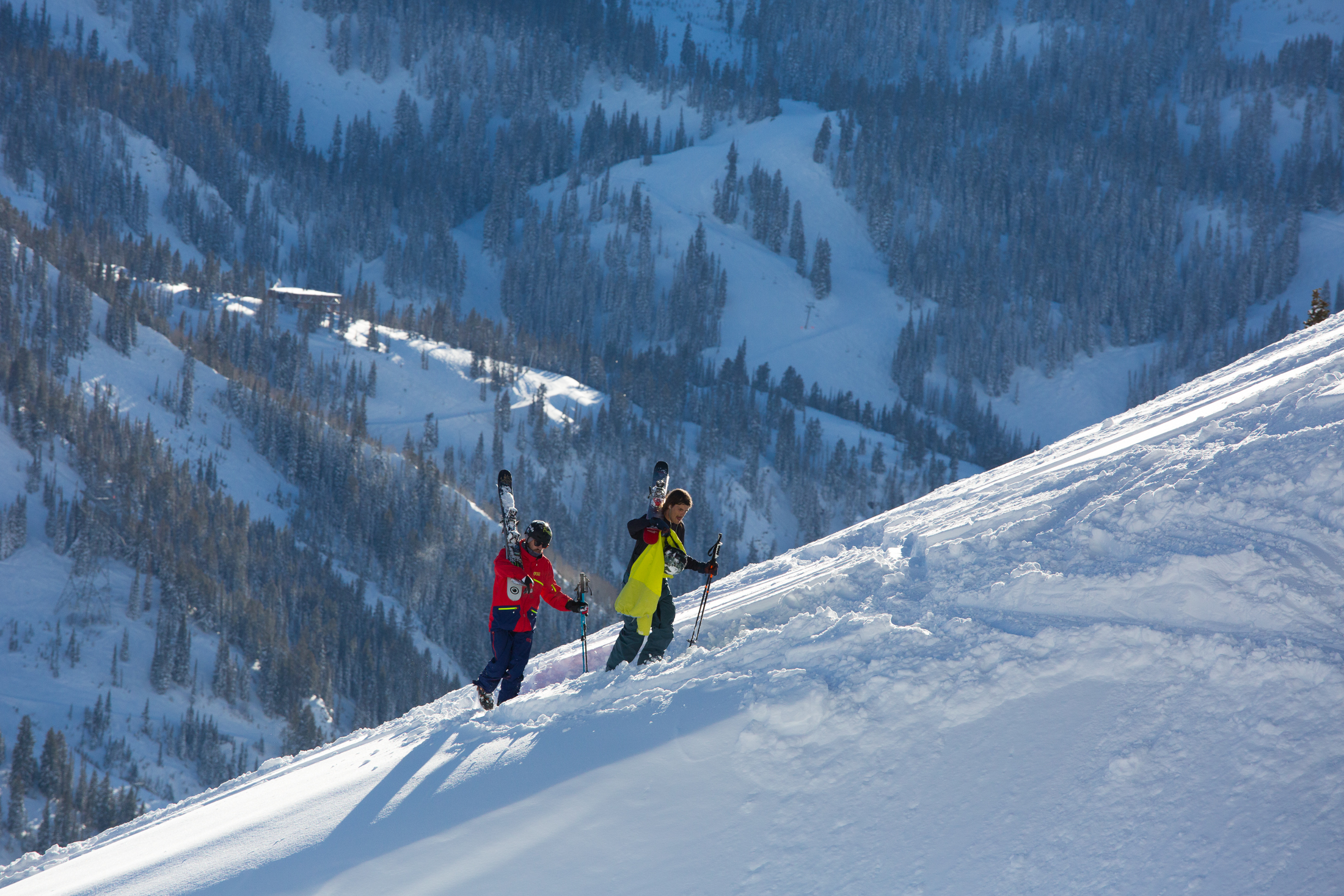 Thayne and Ian hiking up for another one. 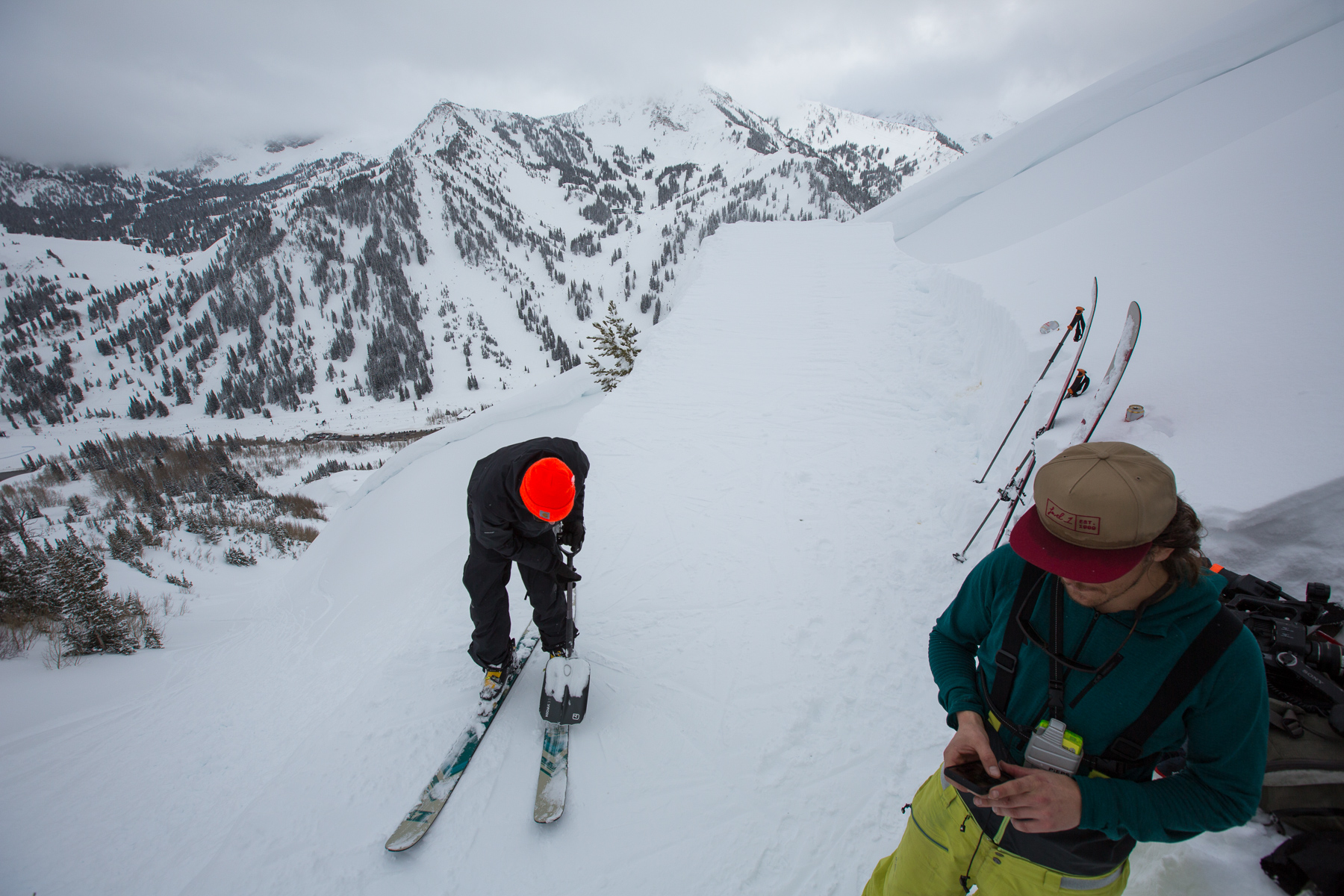 A week later, we returned for a rebate. A foot of new snow had fallen, with some wind-depositing as well. Thayne, Freedle, and I spent a good chunk of a grey day giving the old gal a dust off. 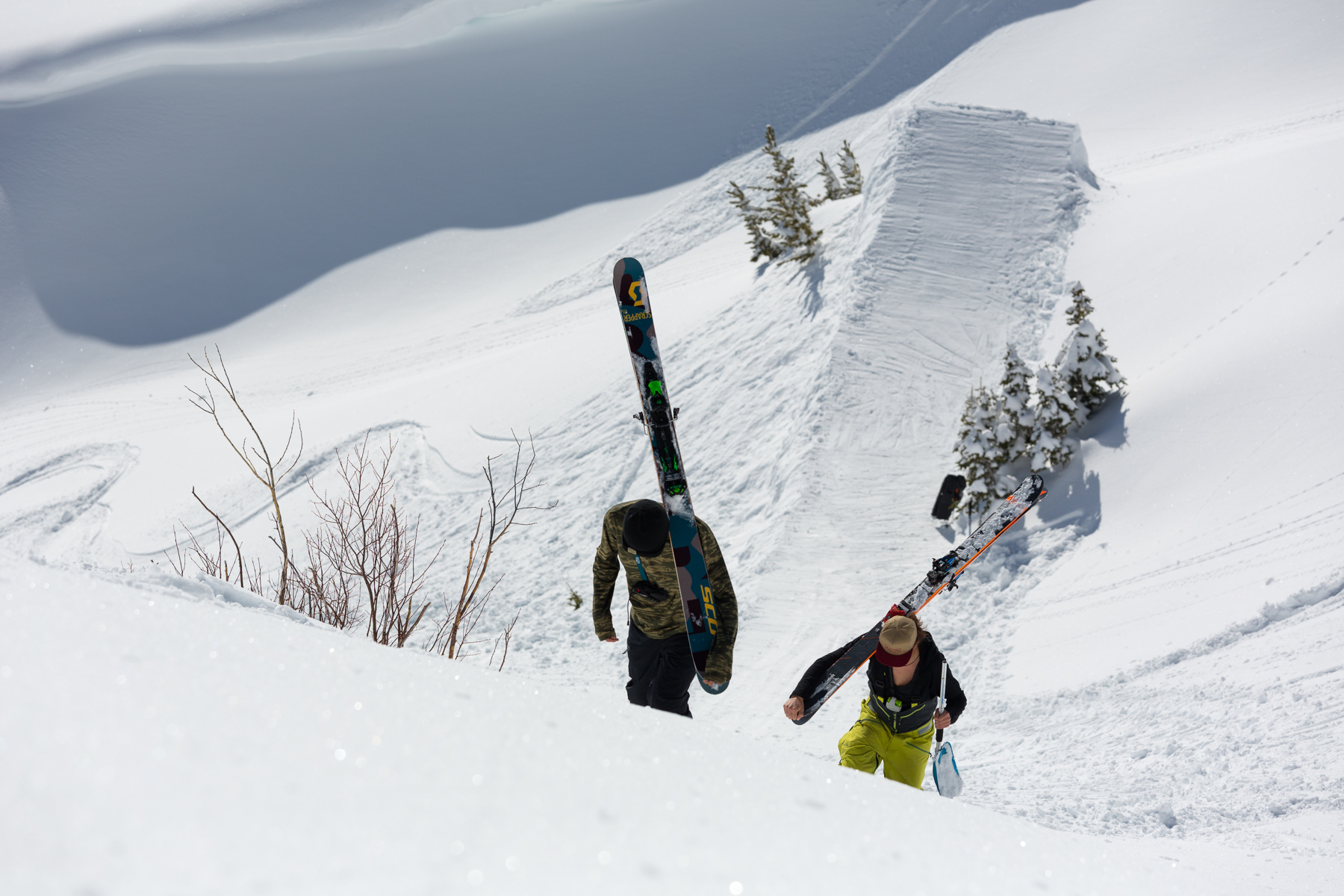 Session number 2 consisted of a smaller crew. Thayne and Sander Hadley were hitting the jump, while Freedle, Austin, and myself shot it. 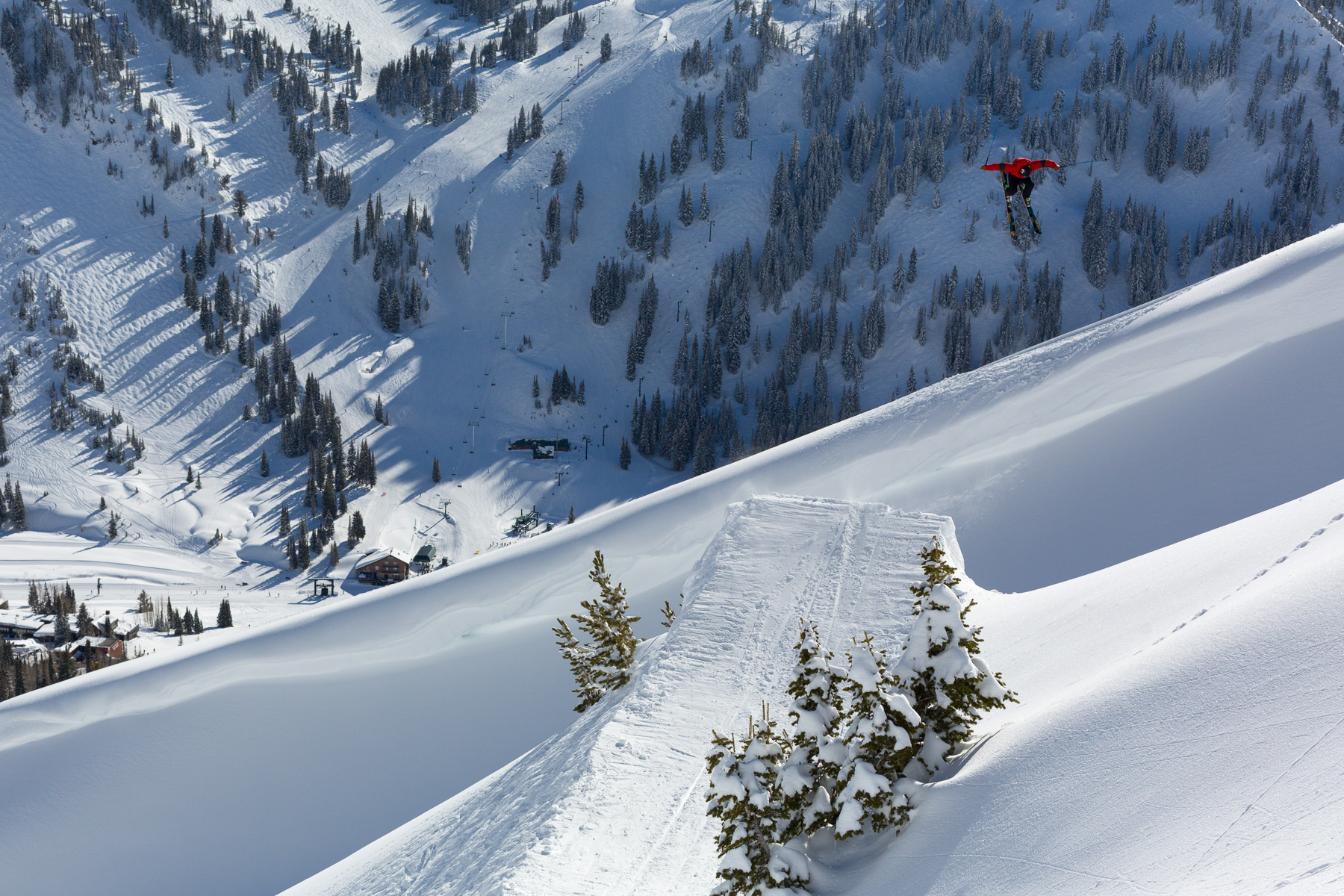 Sander, lift-off over Alta. Crazy how much bigger the cornice on the knuckle got. Compare to photos from session number 1. 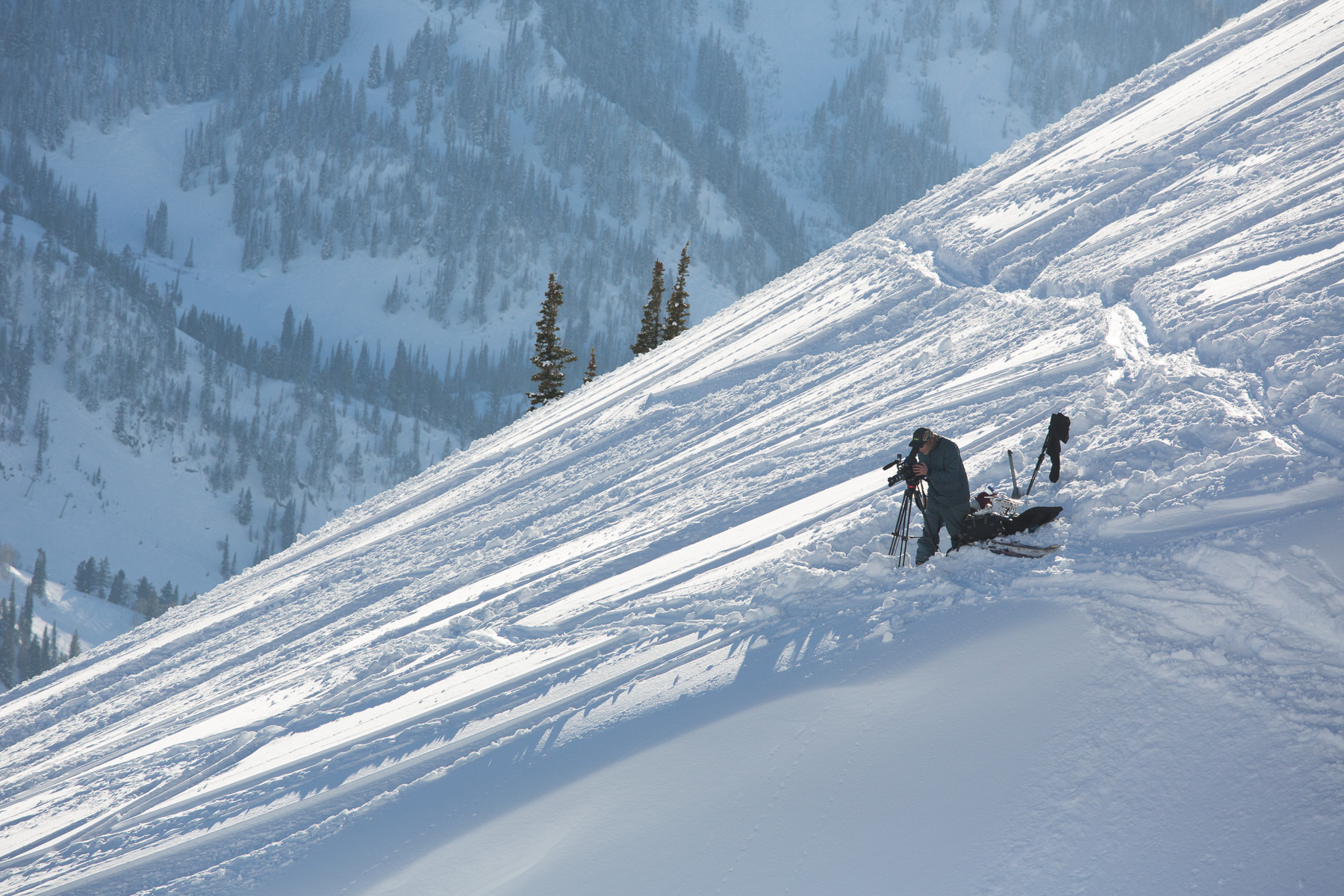 Austin Ramaley, the mastermind behind 4FRNT Skis media production, filming from above the knuckle for session number 2.

This was the biggest jump build I have been a part of. The only build that comes close to this is Pyramid Gap, which I helped build years ago, but Upper Flag definietly required more snow to be moved in order for the off-kilter inrun to be perfected. Although it took tons of effort to build, it was worth it in the end. It was difficult for me to shoot, but I still ended up with some photos I'm psyched on. Being a part of this project makes me want to get out and build some more big jumps this season, as I think they are worth the effort.